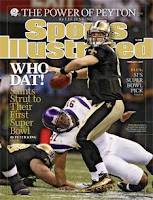 Titled "House Of Hockey", it chronicles the lives of the Lamoureux family of Grand Forks, N.D. and their six hockey-playing kids. Interesting story on a lot of different levels...

First and foremost is that these six kids aren't simply average hockey players. Offspring in the family plays or has played: top-level US college division one (two of the kids, including one who has been a NCAA Player of the Year candidate), Canadian college hockey, US Junior hockey and... oh yeah, Olympic hockey via the twin sisters who will play in Vancouver.

This by itself would make for an interesting story, but there's a lot more to the piece... ranging from the backyard pond that everyone skated on growing up (gotta build me one of those backyard rinks some day) to the battles with depression faced by one of the sons, Jacques.

I would have liked to know more about his struggle, but can't help but be impressed by someone who went through so much and still reached his current point as one of the best players in US College Hockey while playing for Air Force.

Good stuff and a compelling read for any hockey fan.
Posted by Dave at 2/02/2010