Radical Candor by Kim Scott is a solid book with the subtitle Be a Kick-Ass Boss Without Losing Your Humanity. Scott notes that at the heart of being a good boss is having good relationships, ones built on radical candor. From this, a boss can provide guidance to produce better results and help employees achieve.

It’s detailed that the role of a boss is to listen to their employees and to care personally about what they have to say. A boss should start by asking for feedback and criticism, not by giving it out, and understand what motivates each person. In 1:1 meetings, employees should set the agenda and a boss should be a partner, not an absentee manager or a micromanager, and from this, trust gets built.

Along with this foundation of trust, a boss should tell people clearly and directly when their work isn’t good enough. It’s not mean, it’s clear, and it should be provided in the moment and be about the actions, not the person. Also, everyone can be exceptional at something, it’s the role of the boss to help them find that thing. Scott as well details what she calls the get stuff done wheel: listen, clarify, debate, decide, persuade, execute, learn, listen again…

Listen – give the quiet ones a voice, create a culture of listening

Clarify – if someone doesn’t understand, the fault may be with the person making an unclear argument

Debate – focus on ideas and not egos, create an obligation to dissent, be clear about when the debate will end

Decide – the decider should get facts, not opinions

Persuade – focus on the listener’s emotions, demonstrate your credibility, and show your work

Learn – be willing to course-correct

There’s a number of solid things by Scott in the book, both for a boss and for an employee of a boss.

The Premonition by Michael Lewis

The Premonition by Michael Lewis is subtitled A Pandemic Story and covers some of the major players in U.S. pandemic response (or lack thereof) at a county, state, and federal (particularly the CDC) level. 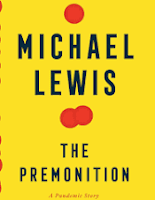 Lewis notes in the introduction that the United States has a bit more than 4% of the world’s population and as of Spring 2021, had a bit more than 20% of its COVID-19 deaths. In February 2021, The Lancet published a piece noted that if the COVID-19 death rate in the U.S. had tracked at the average of the other G7 nations, 180,000 of the then 450,000 dead would still be alive.

The book covers how decentralized the federal government is and yes, it got worse under Trump, but it wasn’t great to begin with. It’s remarkable how ineffectual the CDC is written of as being, and how many county health officers assume that the CDC will provide guidance and leadership. The CDC mentality was described as focused on taking no action they could be blamed for later. Lewis notes what a loss it is that many brilliant and capable people leave government work to be more well treated and respected in the private sector.

It's covered how President George W. Bush in 2005 read the John Barry book The Great Influenza and demanded that a pandemic plan be created. Richard Hatchett and Carter Mecher were two people involved in the creation of the plan and what they wrote was that lives could be saved by taking measures before vaccines available. Additionally, a scientist named Bob Glass figured out along with his high-school-aged daughter how infectious disease transmission could be limited. One of the things that they espoused was school closings, especially giving how tightly confined kids were in school.

Charity Dean is a former chief health officer for Santa Barbara County, and in that role, was struck by the power she had to combat communicable diseases and relentlessly tracked down potentially cataclysmic public health crises. California was noted as unusual with control held at the county health officer level, for most other states, it was the state health officer or governor. As we went in the pandemic, Dean was second in charge at the California Department of Public Health, with the person in charge for the state, Karen Smith, having no experience in communicable diseases and a see no evil, hear no evil approach. She in late February had a call with the 58 county health officers in California and said they on their own, same as Trump said to the states.

Hatchett, Mecher, Dean, Lisa Koonin and a handful of other people, some 5-10 in total, were in contact by early 2020 and all felt that a pandemic was coming, despite the statements from the CDC and White House. It’s described as being like the Mann Gulch fire, burning out of control, but people don’t realize it yet. From their calls and emails emerged actions cherry picked from by the actual government.

Lewis throughout the book writes of the things that should have been done that simply weren’t, and how we should have learned so that we prepared for a virus with the same level of communicability, but a greater potency and fatality rate.

Atomic Habits by James Clear is a solid book with the subtitle An Easy & Proven Way to Build Good Habits and Break Bad Ones. It’s a fast read with lots of tangible steps to take and systems in it.

Clear starts with the attention-grabbing story of getting hit square in the face with a baseball bat in high school, almost losing his life. He writes about the habits he started to build while in college, with habits defined as a routine or behavior that is performed regularly—and in many cases, automatically. Small habits that accumulate can make a big difference, working on the same principle as compound interest. Also, your outcomes are a lagging measure of your habits, often without huge changes until eventually leading to exponential results. Goals are the results you want to achieve, and systems the more important processes that lead to those results.

The book details how behavior change is about outcomes, processes, and identity, with the most impactful identity, being someone who does something or does things a certain way. For instance, “I’m not a smoker” rather than “I want to quit smoking.” Your habits are how you embody your identity. As you do something, you become that thing and the best way to change who you are is to change what you do. Clear notes that people should first decide the type of person they want to be, then prove it to themselves with small wins. Habits can change your beliefs about yourself and are mental shortcuts learned from experience. Clear notes that to build better habits, one should make it obvious, make it attractive, make it easy, and make it satisfying:

1. Make it obvious - The first step is to simply notice what your habits are. From there you can take actions. You can make a specific plan of steps to take that are to become a habit, and the more specific, the better. Make the habits you want right in front of you to implement. For instance, if you want to eat healthy, buy fruit and put it out on the table for you to grab from.

2. Make it attractive - You can pair an action you want to do with an action you need to do. For instance, if you do ten 10 burpees, you can check your social media. A good way to build better habits is to join a group where your desired behavior is the normal behavior.

3. Make it easy - Habits aren’t hard to form, they simply come from reps. You can set yourself up for success at forming habits by priming your environment so the habit easy to do. Remove the friction associated with good behaviors, increase the friction associated with bad behaviors. It’s ok to reduce your habits at first, to make them small. For instance, reading at night can begin with “read for two minutes.” Just show up, don’t worry about what happens next as in doing so repeatedly, your identity becomes that of someone who shows up.

4. Make it satisfying - It’s good to create rewards for good behavior. For instance, using toothpaste that leaves your mouth feeling good. The brushing is what’s important, but the taste is what’s satisfying. A habit tracker is a simple way to feel good about what you’re doing. A good way to think about falling short on doing something is the law of two, it’s ok to miss something once, you don’t want to miss it twice. Don’t be too hard on yourself.

Towards the end, Clear notes that the goldilocks rule states that people experience peak motivation when working on tasks that are right at the edge of their current abilities. The greatest threat to success is not failure, but boredom. Anyone can work hard when they feel motivated, but you have to work through boredom. It’s the ability to keep going when work isn’t exciting that makes the difference. Habits + deliberate practice = mastery.

The Four Winds by Kristin Hannah

The Four Winds by Kristin Hannah is an engrossing novel that felt like it could be a nonfiction account.

Hannah tells the story of Elsa Wolcott, who in 1920s Central Texas was pregnant and cast out by her parents, joining with what would turn out to be a abandoning husband and father in Rafe Martinelli and his saint-like parents Tony and Rose.

By 1934, the Martinelli family farm was barely producing crops as drought and dust storms ravaged the land and created enormous poverty, along with health problems for Elsa's son Anthony. She takes he and his sister Loreda to California in search of a better life and is met there by the continued Great Depression and xenophobia against migrants from the Dust Bowl. The story that Hannah tells set in the San Joaquin Valley continues to be a captivating one as Elsa fights to keep her children sheltered and fed in a harsh and unforgiving environment stacked against migrant workers not in a position of power.

It's an excellent book that provides a story that seems taken straight from history and shows one woman's fight for her family and the importance of caring about one another in the face of hardships. The tale that Hannah eloquently writes is of a time and events that should be remembered and she notes her website containing a suggested reading list about the Dust Bowl years and migrant experience in California.