Great piece on Roger Ebert in the March 2010 issue of Esquire.

From the frequently linked to in this blog Esquire writer Chris Jones, "Roger Ebert: The Essential Man" is an in-depth look at the film critic. 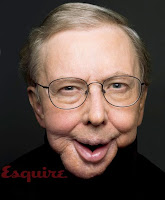 What comes out in the piece is the health battles that Ebert has gone through and how that's impacted and guided his life and work.

I'm always interested in the idea of a writer who also does a large amount of blogging and Ebert's blog definitely puts him in this category (with another writing resident being Sports Illustrated writer Joe Posnanski who publishes his "Joe Blog").

To the mention of Ebert's blog, Esquire included online a link to his blog post about Jones writing the profile. Not often that you get to read both a deeply personal story about someone and then the subject's thoughts about that story.

Also of interest to me from this March 2010 Esquire issue was the extremely short Scott Raab piece "How to Teach Your Kid About Money" and a reference to the W.C. Heinz book "The Professional".

I don't find the Raab piece online so I'll just list out here some of the concepts I liked from it:
- Even at a young age, your kids should learn about money... and a $100 bill from the Tooth Fairy can help accomplish that.
- An allowance says your kids work for you... they don't, they're part of the family.

The W.C. Heinz book reference was of interest as Heinz was written about shortly after his death by the aforementioned Chris Jones... with his story "Death of a Racehorse" noted as an example of great writing.

As I looked online a bit for Heinz and his work, I found he also had a few different pieces included in "The Best American Sports Writing of the Century". Pretty good company there for Heinz...
Posted by Dave at 2/19/2010