Great story in this week's issue of Sports Illustrated on quadriplegic Marc Buoniconti. 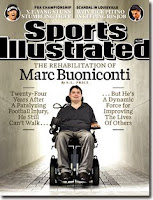 Written by S.L. Price, it's titled "Three Lives, Two Hits, One Happy Ending" and is about the impact that Bouniconti has had since his freak spinal-cord injury suffered on the football field some 24 years ago. In addition to his vast contribution to spinal cord injury research through The Miami Project to Cure Paralysis, the ex-Citadel football player has individually helped both the person involved in the accident (through Buoniconti hitting him, not the other way around) and countless others.

Price gives a riveting tale that makes me both have tremendous respect for Bouniconti and wonder what the heck was going on at his school at the time he was injured. The article details how (incredibly) The Citadel didn't want to pay medical bills for or honor the scholarship of the athlete injured during a game... one in which there's question as to whether team doctors should have allowed him to play. It's a good postscript that the school and individual have since reconciled, but still... it just sounds to be bizarre behavior on the part of the military school.

Just a compelling read from an excellent author. Price has done several different SI stories I've linked to and is also the author of the excellent books "Heart of the Game: Life, Death, and Mercy in the Minor League America" (which I reviewed here) and "Far Afield: A Sportswriting Odyssey".

Also from this issue is a memorial piece on Eunice Kennedy Shriver who passed away recently. Written by Jack McCallum, it remembers the tower of a woman who founded Special Olympics. Having volunteered at local Special Olympics events, I can say it's an amazing organization and the world is a better place for it.

From McCallum's piece, I love the anecdote he provides about Shriver prior to the founding Special Olympics...

"Everybody told my mother that mentally challenged kids would start crying if they lost," says Bobby Shriver, "to which my mother said, 'So what? That's what everyone does.' Her thought was, You compete, you exult if you win, you get sad if you lose, and you go back and try harder."