Finished reading "Angela's Ashes" by Frank McCourt and... man, I'm glad I didn't grow up poor in Ireland 60 years ago. The below second paragraph of this memoir describes pretty well what's to come in the follow few hundred pages: 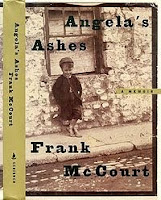 What makes this such a compelling read is that it contains the two basic elements of great writing... a compelling topic that's described well. McCourt's phrasing and language used through the book is simply excellent writing and brings to life the day to day scratching for survival of he and his family.

One thing I found interesting after reading the book was to see what happened to the main characters of the book. McCourt himself passed away of cancer in July 2009 and his wikipedia page describes his three brothers now living in the US, two of them being published authors and one also having run against Eliot Spitzer for Governor of New York.

There's also some controversy around McCourt, not surprising given that he doesn't portray his hometown of Limerick, Ireland (or that Catholic Church there) as being terribly nice. A particularly incendiary attack was made by the late Irish actor, Richard Harris (who played Dumbledore in the first two Harry Potter movies) in this interview. It's certainly possible that some of what McCourt wrote of in "Angela's Ashes" isn't an exact retelling of events, but I still found it a fascinating story written really well.

I suppose it had the mark of a good book in that I'm now interested in reading McCourt's follow-up autobiographies "Tis" and "Teacher Man".
Posted by Dave at 8/17/2009