"Heart of the Game: Life, Death, and Mercy in the Minor League America" by S.L. Price 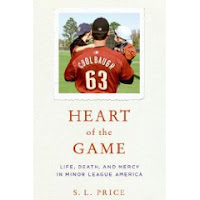 I've found Price to be an excellent writer from reading his book "Far Afield: A Sportswriting Odyssey" and learned about this new work from an excerpt in an April 2009 issue of Sports Illustrated (which I wrote about in this post). While the excerpt itself is interesting in that it's about the dangers of batted or thrown balls on the baseball field, it leaves the root of the story for someone who reads the book itself.

Price's work is a non-fiction narrative about long-time minor league baseball player (and subsequently minor league hitting coach) Mike Coolbaugh being killed by foul ball while coaching first base during a AA game. While the most impactful part of the book is those pages which describe the event itself, the entire story covers much more ground... and well.

Coolbaugh's life and that of his wife and young children is profiled along with that of the batter, Tino Sanchez Jr., but more than that, the book is about minor league baseball. Fans of major league teams see the upper echelon of players in terms of skills, salary and achievement of dreams, but the minor leagues is different.

Throughout the book, Price eloquently portrays the struggle of thousands of minor league players attempting (most unsuccessfully) to reach this major league goal. For those like Coolbaugh who briefly reach the majors, the game can be perhaps more painful when it provides a taste of success, but then takes it away with a return to the minors. So close, but just not quite there... whether due to skill level, injuries suffered or simply bad breaks.

As is described through multiple stories (with Coolbaugh's of course being the most heartbreaking), the game can be a huge burden for those who play it.

In short, "Heart of the Game" is a great baseball book... which works on many levels beyond the game, but at it's core, is still about the game.
Posted by Dave at 7/25/2009