Very profound cover story in the latest issue of Time Magazine that brought to mind other pieces from Time on the same subject. 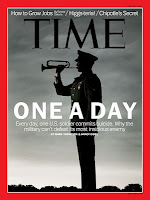 The recent feature by Nancy Gibbs & Mark Thompson was titled "The War On Suicide?" and details the epidemic of suicides among current and former U.S. military personnel. The authors cite current statistics of one active duty suicide a day and one every 80 minutes among all veterans, but go beyond the horrifying numbers to detail the personal stories of several recent suicides by active duty servicemen. Just painful reading the depiction from a surviving spouse of mental health help that was sought in vain within the military.

Along these lines, the piece very much brought to mind some past Time features I've noted and linked to by the same writers. Mark Thompson penned in April 2009 "Why Are Army Recruiters Killing Themselves?" and in December of the same year I did this blog post on the Nancy Gibbs Time cover story "Terrified or Terrorist?" about Fort Hood shooter Nadal Hasan. Both works very much shared with the recent cover story a commonality of showing an active duty military culture of pushing forward and not showing weakness or a need for help.

On the same subject, but with actually a positive take-away was the December 2010 piece "Bringing Dogs to Heal: Care for Veterans with PTSD" by Mark Thompson and then in November 2011, I wrote a blog post featuring another Thompson Time cover story "The Other 1%" about the all too frequent disconnect between non military personnel and those who serve or have served.

It's an extremely difficult problem with no easy solution, but Gibbs and Thompson have done excellent work shedding light on the situation and need for greater efforts by the military at helping it's own.
Posted by Dave at 7/16/2012