Several features of note from Time Magazine over the past few weeks including the Nov 21 issue cover story on US Servicemen and Women returning home from duty. 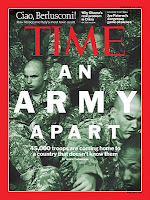 Written by Mark Thompson, The Other 1% examines the ever-widening disconnect between those in our Armed Forces and the rest of the population (including our elected representatives). The problem detailed by Thompson is an important one, but short of a there being mandatory service (which hardly anyone advocates), it's not really clear how to fix the problem and bring more in step the military and rest of US society. Also, it's neither a backing for Thompson's points nor a rebuttal, but another piece closely related (and referenced in the issue's Editor's Note by Richard Stengel) was The New Greatest Generation by Joe Klein on contributions made by returning veterans.

The other story from this issue that stood out was the Michael Scherer written profile on former Obama Administration staffer Van Jones. The Return of the Rabble Rouser looks at the efforts by Jones around messaging of progressive issues and features interesting content related to both the Occupy Wall Street movement and President Barack Obama. Extremely simplified point around Obama was any sort of effort has to be led by ideals rather than an individual. It certainly didn't seem to be a slam at the President, but rather a statement that the man is not the movement. Whether someone agrees with Jones political views or not, the concepts from him as laid out by Scherer are interesting ones.

Final recent Time piece to mention was Virus Hunter from the Nov 7 issue. The Bryan Walsh story looks at Nathan Wolfe and his work as founder and head of Global Viral Forecasting. Fascinating efforts from Wolfe in an effort to identify early on future infectious diseases so outbreaks can be prevented prior to the level of a full-blown pandemic.
Posted by Dave at 11/14/2011