Some very cool stuff both from and related to the latest issue of Sports Illustrated. 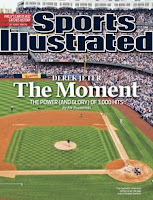 In terms of stuff related to, the wide angle cover shot of Derek Jeter and his regular season hit number 3,000 is almost a carbon copy of the Jim Thome SI cover last September... linked to here and which also had an accompanying cover story by Joe Posnanski.

Before this latest issue came out I saw "The Day Jeter Hit 3,000" published by Posnanski for his Sports Illustrated blog. The actual magazine story is an ever so slightly edited down version, but the blog post carried more impact reading it the same Saturday that Jeter had his ridiculous 5-5 day with hit number 3,000 being a home run.

A sidebar story around Jeter and this feel-good day was provided by Yankee fan Christian Lopez. Pretty much immediately after catching Jeter's home run ball Lopez volunteered to give it back because as he said (quoted in the Posnanski piece), “It’s HIS accomplishment.” Piling on with the feel-good and good things happen to good people concepts, came "Yankees Fan’s Generosity Is Returned, With $50,000 to Ease His Debt" from the New York Times.

From this same Sports Illustrated issue also came "The Legion Of Arms: Part II - Brotherly Glove" on Phillies catcher Carlos Ruiz. The Gary Smith piece was solid writing to be sure, but particularly compelling as it was the follow up to Smith's extremely original "The Legion Of Arms" on the Phils starting rotation for the SI Spring Training Preview issue (posted on and linked to here).