The annual Sportsman of the Year Dec 6 issue of Sports Illustrated featured multiple interesting pieces... with one great one from Joe Posnanski. 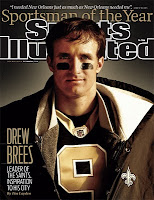 The cover story was a solid read on someone who appears a very stand-up guy in New Orleans Saints quarterback Dree Brees. It's easy to be sceptical of a pro athlete's "goodness", but Brees seems to actually have it.

Also, a worthwhile story that unfortunately doesn't appear to be available online was "The Boy Who Died of Football" by Thomas Lake. About the heatstroke-caused death of 15 year-old Kentuckian Max Gilpin, it's a look at an all too common football-related catastrophic injury. What made the story uncommon was Gilpin's High School coach being prosecuted for reckless homicide in Gilpin's passing.

It's a sad tale about a kid who perhaps didn't really want to play football, but was pushed to do so. Particularly jarring from the story was the quote by Gilpin's (portrayed as aggressive) father after his death... "I underestimated the kid, big time. His heart. Can you imagine the fortitude it took to keep running out there?" So messed up.

Interesting and solidly written stories both of these were, but the one from this issue that really got me was the aforementioned Joe Posnanski piece. "A Dream In The Making" is about Kansas City Chiefs General Manager Scott Pioli and succeeds spectacularly in that it's a riveting look at an inconspicuous guy.