"The War for Late Night" by Bill Carter

After reading an excerpt in Vanity Fair a few months ago (which I linked to and posted on here), I got from the library and just finished "The War for Late Night: When Leno Went Early and Television Went Crazy". 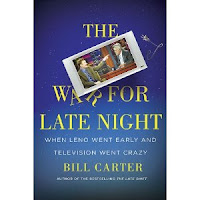 Written by Bill Carter, it's an interesting read from the perspective of both business and people. From a business perspective, there were large dollar decisions being made by NBC execs... and the Carter book quotes people who raise the valid question of whether financially things turned out as best they possibly could have for NBC. From people standpoint, the decisions made greatly impacted a lot of people... but, were also made by very fallable individuals guessing at what they felt was the right course of action.

Where this got really interesting to me is that the business decisions revolved around talent. It's a pretty compelling subject, this idea of managing or placing a value on creative work and how to best do it...

The epilogue delved into this explicitly with thoughts from no less an expert on large dollar generating creativity than Jerry Seinfeld. He had some interesting takes around working, what should be taken personally and the notion of doing a job as opposing to carrying on an institution. In short, he felt the high-minded approach from Conan didn't make sense and quotes the success cliche about how "95% of it just showing up."

Seinfeld isn't explicitly quoted saying this, but the inference from his commentary was that a job is a job, and Conan O'Brien should never have taken as personal something that is about money. Basically, doing great work is important, but that work has an end goal (money) and that end goal has masters (studio execs in this case)... and if those masters want to either have you modify or move 30 minutes later a show they've created, than so be it.

The book is pretty lengthy and someone without interest in this central idea of business decisions around creative people and things might have their attention wane, but it's a good read... and definitely at least worth a read of the aforementioned Vanity Fair excerpt to gauge further interest.
Posted by Dave at 12/24/2010