Some interesting topics covered and excellent writing from the latest issue of Esquire Magazine. 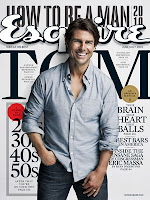 The piece that stood out to me the most was "How to Raise Men" by A.J. Jacobs. He's a frequent contributor to Esquire and while I've enjoyed some of his writing, some I haven't cared for as much (such as his book "The Know it All" about reading the encyclopedia).
However, this story about some specific values in relation to his young boys (a 6 and twin 3 year-olds) is really solid. While it's true that it strikes a cord as a result of my having two boys, the writing from Jacobs is entertaining and poignant at the same time (always a good combo).
Some of the values he discusses are tribalism (in relation to cheering for a given team), brotherhood (just what you'd think) and delusional optimism (that all kids seem to have more of than adults). What really hit me, though, were the vignettes about two nightly rituals Jacobs has with his boys (probably more the oldest at this point)... (1) saying what you're thankful for and (2) talking about what you did right and wrong during the day gone by.
-----
Other stuff I found particularly interesting from this issue...
From writer Cal Fussman was the cover story, "Tom Cruise: The Fixer". While I can understand why Cruise has developed a reputation as a bit of a wacko (see: his postpartum depression jag about vitamins and exercise), this piece provides a different view.
Beyond portraying Cruise as a normal(ish) guy, it attributes to him a pretty profound view of work and getting good at things. The basic concept is when you try to do something you haven't done, you first keep your mouth shut and listen and then you put in the work to figure it out. Boil that all down and... you put in the work.
Maybe Cruise is simply repeating a basic concept, but I respect him putting credit for his success there.
-----
Also, financial writer Ken Kurson provided his one page essay "Why Saving Money Won't Save You". In it he covers two things that struck me. The first was the idea of income and expenses... and how income is something you often get by doing what you'd rather not do, that being work. If you like the work, that's great... but, if you don't always, you can still do it as a means to an end.
The second thing from Kurson that I really liked was mention of his financial guy turned doctor turned inventor (of the Zigo bike) friend. Thing to note here from Kurson was how the friend created the bike (and company to sell it, I imagine) in "his spare time."
-----
Finally, this issue had something interesting from Jon Favreau in his "What I've Learned" piece. The quote was "I had a writing teacher who said, 'if you want to learn to write a screenplay, read "The African Queen" twice'."
Posted by Dave at 7/04/2010