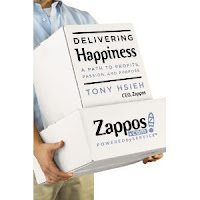 Good book... I wouldn't call it great, but definitely good and features insight into Zappos and the building of a company.

I first heard about the book from this extremely interesting Inc. Magazine piece from Hsieh titled "Why I Sold Zappos" (which I wrote about here). Regardless of whether or not someone reads the book, I recommend the Inc. story. Just an excellent tale of running a company in a desired way... and having to reconcile that with the interests of outside investors (which in this case were Venture Capital, but could also be shareholders of a public corporation).

From both the Inc. story and book, I've got quite a bit of respect for Hsieh and his approach... with additional credit going to the rest of the leadership at Zappos.


The book and what it covers

Hsieh was an extremely smart kid, and also one who had an interest at a young age in running businesses. His intelligence helped him get into Harvard and from there land a programming job at Oracle. After quickly becoming bored with corporate life, Hsieh quit to embark on running his own show.

What started out as a web design business turned into the banner ad company LinkExchange. Several months into the venture, Hsieh turned down half a million dollars for the company and then a few years later sold to Microsoft for $32M. Rather than remaining at Microsoft for a year to collect an $8M retention bonus, Hsieh realized he wasn't doing what he wanted and left the company.

He started an investment fund and early on put money into an online shoe website. Before long, the fledgling company reached a point of either failing or needing more investment. Hsieh then put in personal money and got actively involved in helping run things. It was certainly a struggle at times, but the company carried through.

If the first part of the book is the background of the author and what led to Zappos reaching it's current point, the second part is about many of the core beliefs that Hsieh and the other managements have made a part of Zappos. The evangelizing of Zappos was a bit much for my taste, but I can't take great exception with it... Hsieh believes in what he created at Zappos and wanted to write about that in this book.


Most interesting stuff for me

The decision was made to have Zappos be about the best customer service... as well as best workplace culture. I've written about these dual topics before and they're definitely easier said well than done well, but Hsieh seems to have genuinely built a company that tries hard to nail both goals.

This has been done through things such as a learning library of books that employees could borrow and more importantly, a general transparency within the company culture. Biggest manifestation of this openness is The Culture Book which is an actual unedited hardcover book with employees saying what the culture means to them.

I love this idea of an actual book with unedited content and this idea of transparency makes me think beyond just companies and to how the same openness can lead to effective writing (as I made note of in this review of "The Tender Bar" by J.R. Moehringer).

Back to Zappos... from reading the book (and particularly the Inc. Magazine piece), I think they probably made the best move possible with the Amazon deal, but suspect they would have preferred to continue on their own... which couldn't be done with Venture Capital investment looking to cash out and move on (an idea I wrote about in the same blog post in which I linked to the Inc. piece).

All in all, a good book about a guy that's built a solid company in what appears to be the best way he possibly could.
Posted by Dave at 7/30/2010