Two very compelling pieces from the May 31 issue of Sports Illustrated. 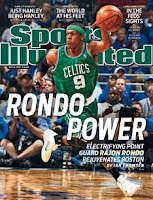 He comes across in the Epstein piece as a leader of men (one of only four cadet regimental commanders at West Point), but also someone with a remarkable family background.  Three brothers before him entered the military and he's gone through the heartbreak of having older brother Matthew Ferrera killed in action in Afghanistan Nov of 2007.

It's moving to read of someone who deals with such loss and moves forward with an incredibly difficult path... with Andy Ferrara's statement from Epstein's article being "just because my brother died, doesn't mean I don't have to serve."

The second article from this SI that stood out to me was written by one of my favorite writers, S.L. Price.  "Lionel Messi: The World At His Feet" is about the F.C. Barcelona and Argentina National Team football (leading into the World Cup next month, I'll use the global name for the sport) star.  Messi the player makes for an interesting subject given his widely noted status as best player in the world, but the context around him makes for some pretty remarkable reading.

As Price describes Messi... loved in Spain, but viewed with some combination of detachment and demanding expectation in his native Argentina.  Add to that a large personality conflict with his coach/brilliant former player/trainwreck Diego Maradona... there's a lot there of interesting to chew on.
In the article, a 2007 Messi goal is written of and as the below clip shows, it's pretty amazing: