"Home Game: An Accidental Guide to Fatherhood" by Michael Lewis

Having previously read three different Michael Lewis books (which I reviewed here), I was interested to come across mention of Lewis in a Nancy Gibbs essay from Time Magazine titled "Parenting Advice: What Moms Should Learn From Dads".

In additon to having some very interesting commentary about fatherhood, Gibbs wrote about a new book by Lewis titled "Home Game: An Accidental Guide to Fatherhood". Based on his series of articles for Slate Magazine, it stitches together some of his experiences with his three children (not really germane to the book itself, but I also found interesting that Lewis is married to former MTV VJ Tabitha Soren). 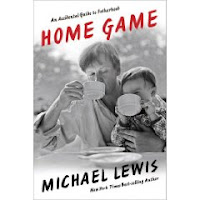 Having now read the Lewis book, I can say it's an extremely fast read that contains some entertaining vignettes and insights about fatherhood.

Since the book itself is in pieced together form, I don't feel bad at all about giving my impressions in the same manner. To whit...

- The idea of fumbling around for the definition of and actions required of being a good father. A murky idea that has changed greatly through the years, and you just gotta make it up as you go, and have it seem both right and livable to you.

- The trauma on a first child at the birth of a second... or on the first two at the birth of a third. Following this, the inherently challenging task of two continuing to raise little functioning (almost) members of society while providing the stuff needed to stay alive for an additional member. As Lewis describes it, what previously could be done in a tag-team fashion on one child now involves much more separation of parental labor to make it happen.

- The seemingly spot-on description of the difference between paternal and Maternal love. That being that father to kid bonds need to be formed through action (helping keep alive and later just helping the young 'un) and mother to kid bonds are there from the start (that whole giving birth to thing).

- The notion of how the adult world for a child is likely a crazy, grotesque place where everything is odd and everyone sized wrong. As an example of this insane place kids inhabit, Lewis retells the anecdote of his oldest daughter asking prior to a flight about his "chickens in luggage"... yep, that's check in luggage to those who actually know different.

- The family trauma that came after the birth of their third child, Walker. First Postpartum Panic Disorder for Tabitha and then a respiratory virus (RSV) for the baby. Tough times, but really touching stuff about Lewis in effect standing guard over Walker while in recovery at the hospital. Reminds me of the first point made in this review... fatherhood is something that in many ways you have to make up as you go along.