After pining for one since first hearing word of it's release, I picked up my new 3G iPhone last week (As this photo essay from Time Magazine shows, I certainly wasn't the only one). While it has received some criticism in the press (mostly for trouble with phone reception), I'm thrilled to now have it.

After being asked why I made the purchase, I realized that the cause is probably split equally between the iPhone's features and what it represents.

The features themselves are pretty well documented... phone, e-mail, web browsing, access to the application store; basically a small personal computer that can make and receive calls. Everything for the most part appears to work well (though I do find odd both that the typing screen can't be rotated 90 degrees to make the keys larger and that the phone texting function can't receive attachments), but what the iPhone represents is a story in and of itself.

A Nov 2007 issue of Time put the original iPhone on the cover (shown below) and in the contained "Invention of the Year" story, details it's leap forward in the areas of both design and user interface. Additionally, though, the iPhone is hyped (in a good way) both for it's being a platform rather than just a phone and it's likelihood to shape technology going forward. This shaping would be from other manufacturers designing to keep up and Apple itself introducing new and better generations of the iPhone... which it has of course already begun to do with the 3G intro. 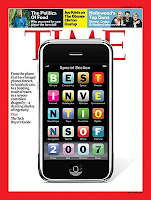 So, while I don't consider myself to be much of a technology early adopter (to use a business lexicon phrase), I'm excited to now own this thing. The functionality is there and maybe just as meaningful, so is the promise of things to come in consumer technology. Very cool stuff.
Posted by Dave at 8/26/2008