"Show Your Work" by Austin Kleon

Show Your Work by Austin Kleon was a good book that followed up on and provided much more detail than Kleon's prior excellent book, Steal Like An Artist (which I reviewed two years ago). 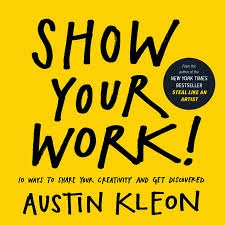 The subtitle of Show Your Work is "10 Ways to Share Your Creativity and Get Discovered" and some of what Kleon writes is noted below...

1. You don't have to be a genius. Be part of a group contributing something and remember to be an amateur; amateurs know that contributing something is better than contributing nothing. Think about what you want to learn and make a commitment to learning it in front of others. You can't find your voice if you do to use it; talk about the things you love and your voice will follow. Read obituaries and keep in mind that they're not about death, they're about life, and second acts.

2. Think process, not product. Take people behind the scenes of your creative work and show the idea and then all the steps to the idea. Kleon quotes journalist David Carr as saying "you have to make stuff, nobody is going to give a damn about your resume; they want to see what you made with your own little fingers."

3. Share something small every day. Don't worry too much about the big picture, just focus on what you do in a given day, do that and then give a daily update, whether that update be a blog post, tweet, LinkedIn update or whatever gets your message out. Also keep in mind that most of your work isn't great, but you have to get it out there to let people decide.

4. Open up your cabinet of possibilities. Don't be a hoarder, share your tastes, you may not have great output yet, but you do have tastes.

5. Tell good stories. Work doesn't speak for itself, people really do want to hear the story behind work. Structure is everything, a good pitch is three acts, where you've been, where you are now, where you want to go and this same principle can be applied to storytelling about others. Talk about yourself at parties, figure out how to describe who you are and what you do and don't describe yourself as aspiring if you really are doing something, it's ok to wear it.

7. Don't turn into human spam. You want hearts, not eyeballs and practice the vampire test and be done hanging with people that suck the life out of you. At the same time, find the people similar to yourself... "identify your fellow knuckleballers."

8. Learn to take a punch. Let people take their best shot at you and don't feed the trolls.

9. Sell out. Kleon on the topic of selling out quotes from a great interview with Dave Eggers I linked to and wrote about a few years ago.

10. Stick around. The phrase "don't quit your show" is used along with "you can't plan on anything; you can only go about your work. You can't count on success; you can only leave open the possibility for it, and be ready to jump on and take the ride when it comes for you."

It was really solid stuff in the book and at the end Kleon both notes the blog on his website and book twitter hashtag #showyourwork.
Posted by Dave at 6/01/2014