Love me the idea of a phenom in sports.

So interesting to think about athletes with practically limitless potential and then to see what they do with it. Possibilities range from the very little (see: Leaf, Ryan) to quite a bit with more to come (see: Crosby, Sidney... with this post linking to an article about him) and everything in between.

Perhaps more than in football and hockey, baseball lends itself to the idea of phenoms and potential to singularly impact games. This is particularly the case with pitchers as a great starter can every five games (or 3 out of 7 games in a playoff series) shut down an opposition... and reminds me of the Earl Weaver quote "momentum is tomorrow's starting pitcher."

To this end, the June 7 issue of Sports Illustrated has two different pieces that deal with this idea of phenoms in baseball. 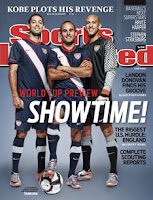 First was "Wave Of The Future" by Tom Verducci. The beginning of the piece is about the great equalizer potential of the MLB draft and the end about can't miss (in the eyes of many experts) 3rd base/outfield prospect Bryce Harper (who last year was the 16 year old subject of an SI cover story).

One interesting quote from Verducci's "Wave of the Future" piece was this statement a year ago by uber-agent Scott Boras in talking to Washington Nationals ownership...

Yep... Boras was right, the Nationals next week are pretty much a lock to take Harper with the first pick and last year took starting pitcher Stephen Strasburg with the first pick. It doesn't happen a lot that one team can draft superstars in back to back years, but as the Pittsburgh Penguins experienced with drafting Evegeni Malkin and Crosby in 2004 and 2005 respectively, it does happen sometimes.

From this same June 7 issue of SI comes the Joe Posnanski piece "What Took You So Long?" on Strasburg. Intriguing stuff about a highly anticipated prospect leading up to his MLB debut Tuesday June 8 vs the Pirates.

Of course, success is not guaranteed for either Strasburg or Harper (they are both still "prospects" after all), but the anticipation of what may be possible... that's pretty cool stuff.
Posted by Dave at 6/05/2010