Couple of things of interest of the Feb 2010 issue of Fast Company Magazine... 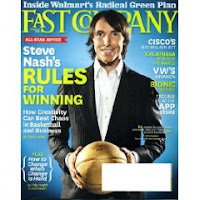 The first was from the cover story on Phoenix Suns point guard Steve Nash. Rather than the entirety of the story, what struck me was mention around his off the court involvements.

One of Nash's business ventures is a film production company, Meathawk, and it's first documentary is an ESPN 30 for 30 project on Canadian hero Terry Fox. The movie is titled "Into the Wind" and will chronicle the run across Canada that Fox made to raise money for cancer research after losing a leg to the disease. While Fox passed away in 1981, his legend has carried on to the point that his mother was a featured participant of the Vancouver 2010 Winter Olympics Opening Ceremonies.

No ESPN air date yet for the documentary, but I'm looking forward to seeing it.
Looking into details on "Into the Wind" led me to read further about the 30 for 30 documentary project. The main website features this Bill Simmons essay on 30 for 30 along with a listing of the features. Among these is "Kings Ransom" about Wayne Gretzky going from the Edmonton Oilers to the LA Kings. Directed by Peter Berg, this movie aired fall 2009 on ESPN and appears to be shown next April 25 on ESPN Classic.

Completely unrelated to Steve Nash, Terry Fox, ESPN or Wayne Gretzky... I also found of note from this Fast Company issue mention of the "weblog about the liberal arts 2.0" Kottke.org from blogger Jason Kottke.
Posted by Dave at 3/07/2010