The idea is for Time Magazine and its affiliated publications including Fortune, Money, Sports Illustrated to continually report on the once thriving city of Detroit.

Both Sports Illustrated and Time had cover stories about Detroit this week and each issue featured pieces from the editor about why Time Inc. made this decision. Both that from Time Inc.’s Editor-in-Chief John Huey and the essay from Sports Illustrated’s Terry McDonell detail how far the city has fallen. The statistics referenced are 29% unemployment, 50% illiteracy and 70% unsolved murders… all from a place that used to be the epicenter of American manufacturing.

As Huey describes, the goal of Time Inc. in reporting so thoroughly on the city is to shine a spotlight and perhaps help Detroit “recover and find it’s way into the future.”

On to the first stories…

The Time Magazine cover piece is titled “Detroit: The Death — and Possible Life — of a Great City” and written by Daniel Okrent. It’s a broad overview of Detroit and it’s current struggles from someone who grew up there. 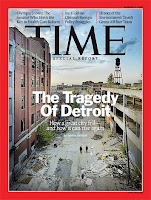 Solid writing from Okrent, but probably more compelling to me was the Sports Illustrated cover story by Lee Jenkins. The frequent baseball writer contributes “Tigertown” about the team and efforts led by owner Mike Ilitch, to help revitalize the city. 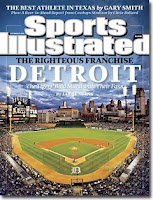 While the role a sports team can play in such a big task may seem insignificant, the franchise has worked hard to put a contending team on the field as well as make games affordable to its fans.

An additional anecdote from the Jenkins piece showed the team’s support of local industry. When General Motors found itself unable to continue sponsoring the popular "home run water fountain", Ilitch decided to not seek different sponsor dollars. Instead, he simply added Chrysler and Ford alongside the GM name in centerfield... at no cost to any of the beleaguered automakers. Not a bottom-line based decision, but a very cool one.
Posted by Dave at 9/26/2009