Took me a little while to slog through it, but I just finished reading "Healthy Aging" by Dr. Andrew Weil. 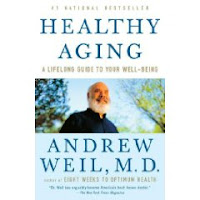 I previously did a blog post about both Weil and Dr. Mehmet Oz so was interested in this book when I saw it at the library. As an aside, sometimes it's a hindrance to reading a particular author you're interested in when they have a number of books in print and you have to pick one. I this this was a good choice, though, as the book seemed to fully impart Weil's views on aging (in the first half of the book) along with his recommendations to try to age well (in the second half).

Some of the things I found most interesting from the book are noted below:

Chapter One - "Immortality": Interesting mention of cells in the human body and how they stop regenerating... with the exception of the only truly immortal cells, cancer cells.

Chapter Two - "Shangri-La and Fountains of Youth": Discusses various communities throughout the world that are known for having a longer living population. There tends to be some constants around diet in these areas, but an even more recurring thread is a pervading sense of community... as well as respect for the elderly and inclusion of them in daily lives.

Chapter Three - "Antiaging Medicine": Features Weil's view that most of the antiaging field is a sham. Also contains a sentiment from Weil that recurs throughout the book... the idea behind healthy aging is not necessarily to extend life, but rather to extend health so that quality of life remains high up until a rapid decline at death.

Chapters Five & Six - "The Denial of Aging" & "The Value of Aging": Both related to a point noted above from chapter 2... an examination of the notion that aging is a good thing as it can provide valuable experience to be passed on and can actually lead to improvement with age.

The second half of the book beyond this focuses more on specific recommendations to aid in healthy aging. Things get a bit bogged down with lots of detailed tips, but all appear good. They range from simple things like getting enough rest to foods that should be eaten as part of an anti-inflammatory diet.

Details around the diet and tons of other information can be found on Weil's website at http://www.drweil.com/ or the "healthy aging" microsite within it. Additionally, his book "8 Weeks to Optimum Health" sounds like an interesting read.

Finally, the conclusion of the book has a mention of ethical wills, a Jewish tradition that has been getting adopted by more and more people from all cultures. The idea is to create a document that passes along to your friends and family your feelings about what's important and what you want to pass on as a legacy.

This was I thought a really interesting idea and made me think of both Randy Pausch's "Last Lecture" (which I did a blog post about here) and what appeals to me about writing... this idea of creating something (sometimes profound, sometimes not at all, but I figure... if it's written, it's "created").