"Tropic of Hockey" by Dave Bidini

Note from me: This isn't a common occurrence, but in addition to this blog, I'm putting the post below on my hockey blog at http://ahockeyguy.blogspot.com/. The reason for the dual-location post is simple... I'm writing about a book that I just finished... and it's about... hockey!
"Tropic of Hockey" is from Canadian musician/author guy Dave Bidini (his website here) and it's a chronicle of his experiences with the game in such hockey hotspots (maybe literally, but not figuratively) as Dubai, remote (and not so remote) China and Transylvania. 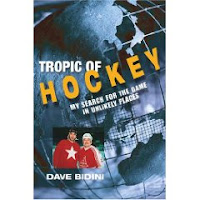 As I touched on in my hockey blog post about the U.S. Pond Hockey Championships, the impetus for Bidini to write "Tropic of Hockey" was a growing sense of disillusionment he felt with the NHL version of the game and a desire to reconnect with it by playing and seeing it from different parts of the globe. While I do love the NHL, I could understand his romantic notions of the game and this desire to experience it in a new way. Not entirely the same, but it makes me think of my appreciation for the "Original Six" teams of the NHL and the fans in hockey markets that care deeply about their local team (see: hockey blog post about Montreal).

This said, there's a lot of stuff that struck me from the Bidini book, so I'll run through some of it here and try to explain why...

Chapter 4 - "Wendel and the Bells": Bidini's story about how he became a hockey fan again as an adult. A very cool description of how it came about and how one player (the aforementioned Wendel Clark of the Leafs) became his favorite.

Chapter 9 - "Bobby Clarke's Teeth": Mention of Bidini communicating with people in China entirely through the language of Russian hockey players they all know of. I like how the words "Fetisov", "Tretiak" and "Kasatonov" can tie people together.

Chapter 14 - "Journey to the Temple of the Dog": Includes anecdotes about Bidini and his friend masquerading as members of the press to secure interviews with favorite players and entry to parts of one of my most vividly remembered hockey events... Rendez-vous '87 in Quebec City between the Soviet National Team and NHL All-Stars.

Chapter 17 - "A Busload of Espo": Primarily about Phil Esposito the '72 Summit Series between Canada and the Soviet Union. The description of the eight-game set makes me wish I had been a fan then (difficult since I wasn't born until a year later).

Chapter 23 - "The Last Canadian Game": Interesting to me for two reasons... one is how much I appreciated the description of Bidini's attendance at the final game in Maple Leaf Gardens (which I wish I had been able to watch Toronto play in). The second (and very different) reason is Bidini's mention of "The Whiskey Robber" during this section of the book on Transylvania. As I was reading this portion, much sounded familiar to me and it was because of my reading of "Ballad of the Whiskey Robber" by Julian Rubinstein. I had completely forgotten this it was a true (or at least mostly true) story about a Robin Hood-esque Hungarian hockey player. So cool... I love when stuff comes together.

So, all this said about the Bidini book... I liked it a lot and think that most hockey fans would as well... particularly those of us that love the history of the game and it's impact.