"I Suck at Girls" by Justin Halpern

I recently finished reading I Suck at Girls by Justin Halpern and thought it a good book, not great, but pretty good. 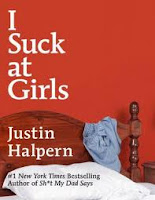 Halpern previously wrote the hilarious Sh*t My Dad Says, an extremely fast read that's probably one part author memoir and four parts quotes from his gruff, profane and loving father. The new book has the content equation flipped with it being much more of a memoir around Halpern's adventures and failures with girls. Definitely still included is his dad, but in story rather than quote form and much more of a secondary focus than in the first book.

One thing that did strike me from this latest effort was mention at the start of the book of how just a few years ago, Halpern was a struggling screenwriter who created a twitter feed to post his dad's quotes and "within two months had more than a half a million followers, a book deal with a major publisher and a TV deal." Pretty sweet career ascendancy to be sure, but (even though Halpern couldn't have known this would occur) seemed to me that it came from him writing something interesting with commercial appeal. The idea of slaving away at a craft people couldn't possibly understand is one way a writer could view their work, but this alternate "interesting with commercial appeal" that Halpern came up with... that's the cool career move.

To this idea of writing about something that will resonate with others, Halpern's dad is no doubt entertaining, but (as mentioned earlier) also someone easy to like. He comes across as a loving father who allows his kids plenty of room to become their own people. Not to over-mythologize, but Halpern's father bring to mind for me a "writing on raising kids" post I did last month, with included John Jeremiah Sullivan story quote...

"We don’t need to go crazy with guilt and worry about our children. We’re not responsible for them. For their upbringing, yes, but not for their existence. Destiny wants them here. It uses us to put them here."

All in all, I'd highly recommend the book Sh*t My Dad Says and if someone enjoys that, they could do much worse than reading I Suck at Girls.
Posted by Dave at 6/01/2012