From the same Sports Illustrated issue that had the Wish of a Lifetime piece I posted on came a very interesting sidebar piece. 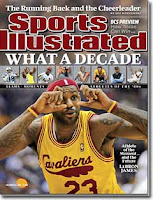 What stood out to me was that Sports Illustrated did something that I've tried to do with this blog... highlight great writing (which sometimes is due to great prose, sometimes great content and rarely, both).

Under the general heading of "Best of the Decade", SI named it's "Best Stories of the Decade"...which contained one that was familiar to me and two that I hadn't seen before.

The piece I was familiar with was written by S.L. Price and interestingly enough... was one I hadn't actually seen before in this form. Titled "A Death in the Baseball Family", this 2007 story profiled the life and tragic passing of former minor league coach Mike Coolbaugh.

I actually first heard about Coolbaugh from a different SI piece, "Hit in the Head", that was an excerpt from the Price book "Heart of the Game: Life, Death, and Mercy in Minor League America" (which I reviewed here). I didn't realize it at the time of reading either the excerpt or book itself, but it appears that the Price story on Coolbaugh actually began with this "A Death in the Baseball Family" Sports Illustrated story.

The two other pieces referenced as "Stories of the Decade" by SI are both from 2001 and featured very different subjects (as described below by Sports Illustrated)...

- "The Wrecking Yard" by William Nack. "Retired NFL players still struggling with disability and pain."
Posted by Dave at 12/31/2009