"For Those About to Write" by Dave Bidini

It's I'm sure an extremely little known book in the U.S., but I just finished reading "For Those About to Write" from Canadian writer Dave Bidini. 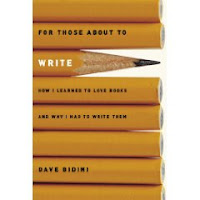 Written for the young adult (teen) audience, it's a very fast read (an hour or two) and contains Bidini's autobiographical path into a writing profession. There's not much in the way of narrative to the book, but there are some interesting things aspiring writers can take away. Below are a few of them...

- Reach out to writers: Bidini knew from a young age he wanted to be a writer and worked towards that... by both spending time writing (outside of school) and sending letters to accomplished writers asking for advice. While not everyone knows that they want to do from a young age (or even middle age), Bidini deserves admiration for his efforts toward his goal of being a writer (and his path reminded me of that Stephen King described is his autobiographical book "On Writing").

- Just write: I suppose this ties into the above notion, but one point that Bidini makes (which also happened to be made in King's book) is the best way to become a good writer is to just write. As he puts it, writing garbage is ok to do, it gives you practice and if you write enough, the good stuff will eventually come out. When it does and you're "feeling it", that's great and you of course keep writing the good stuff, but even when you're not writing well, it's still good to keep putting pen to paper so to speak.

It's not necessarily a criticism, but one thing that I found interesting in the book was that at the end, Bidini comments about writing on the Internet and while he doesn't disparage it, he's also doesn't seem terribly impressed with it as a medium. Where this seems odd to me is that earlier in the book he recommends writers put out "fanzines"... short newsletters on a given topic. To me, this would be in essence a different version of a blog. Both simply mean that the aspiring writer is doing the best thing towards their goal... writing.

All in all, I think "For Those About to Write" is pretty decent book. I came across it because Bidini does a fair amount of hockey writing (I'll be reading his "Tropic of Hockey" book soon) and wanted to see what he had to say about the process of writing itself. If that's a goal of someone, they probably couldn't go wrong taking an hour or two out of their day to see his thoughts on the topic.
Posted by Dave at 10/26/2008

Email ThisBlogThis!Share to TwitterShare to FacebookShare to Pinterest
Labels: "For Those About to Write", "On Writing", "Tropic of Hockey", book review, Dave Bidini, Stephen King
Newer Post Older Post Home