Posted here back on September 1st was "Obama Coverage from Time Magazine", a look at some of the pieces on Barack Obama in Time's special issue leading into the Democratic National Convention.

One week after this, Time published the issue with cover shown below leading into the Republican Convention in Minneapolis. 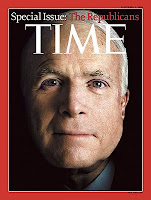 From this, McCain did an interview with two Time writers that could be described as "prickly" (which is the descriptive language Time uses) and belligerent and angry at worst.

A lot has been written and discussed about the character and leanings of the McCain-Palin ticket, with McCain being a war hero and Pain a staunch social conservative (to put it nicely). This interview, though, illustrates my biggest aversion to McCain... that he seems to get too dogmatic and hot-headed to lead Foreign Policy and interact with world leaders who might not have the same appreciation of the U.S. and it's principles (Vladimir Putin, anyone?). Obama may not have McCain's tenure in government, but I feel more comfortable with him than John McCain in this role.

Conversely, Palin is an interesting choice in that it's an obvious olive branch to social conservatives wary of McCain's past statements and record. Personally, though, I'm much more interested in how qualified she would be to serve as President if needed and occupy that same role "across the table from Putin" (or a similarly surly world leader).

She may certainly prove over time to be the right person for that role, but I don't think she's done enough to show it (and feel that her to proclaim herself more qualified than Obama is laughable at best).

In this same vein of "concern" about the idea of a McCain-Palin President-VP combo, Joe Klein writes in the Sept 15 issue of Time "How McCain Makes Obama Conservative". It details Klein's view of how the ticket came about and finishes off with what I feel is a fabulous paragraph...

"The Palin selection — peremptory, petulant — was another example of McCain's preference for the politics of gesture over the politics of substance, as is his sudden fondness for oil exploration ("Drill here, drill now.") and hair-trigger bellicosity abroad (Syria, Iran, Russia). His lack of interest in actual governance is disappointing; his aversion to contemplation seems truly alarming. He has done us all a favor with this pick: he has shown us exactly what sort of President he would be."