The Children's Blizzard by David Laskin

The Children's Blizzard by David Laskin is a solid work of nonfiction about the storm that hit the Midwest on Thursday January 12, 1888. It was known as the "Schoolchildren's Blizzard" because many of the dead were caught outside after leaving school, with estimates of the tool between 250 and 500 people. 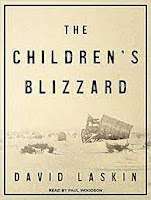 Laskin notes how the storm came across the prairie through the Dakota Territory and into the new state of Nebraska. It caused the temperature to drop 18 degrees Fahrenheit in 3 minutes and couldn't really be said to be snowing, it was fast blowing crystals attacking people's exposed skin and flimsy clothing. In the region that would soon become South Dakota, there were deaths from the storm in 32 of the 34 counties east of the Mississippi River. Laskin provides fascinating writing on how for someone coming out of extreme cold exposure, abrupt movement can bring about cardiac arrest and death as the cold heart extremely sensitive. So many things came together for bad that day, ideal conditions for a huge storm, people exposed to it in what started as the first beautiful day in a while, and a failure of weather forecasting, done by the Signal Office, part of the U.S. Army.

The area the brunt of the storm was felt in was populated by immigrants, many German or Scandinavian. They were enticed by the Homestead Act, where the U.S. government gave adults 160 acres in exchange for five years of farming, and found a hard life, one that required their children to do a tremendous amount of labor to try to help the family scratch out a living. Along the way they encountered extreme weather, insects in the form of enormous grasshopper swarms that would destroy crops, fires that would devastate their fields, and solid ground that often wasn't conducive to farming.

In writing about the storm of 1888, Laskin provides fascinating content about the physics of weather and about the people, he tells so many interesting stories of schoolteachers making decisions of whether to send their students out in the conditions or keeping them in, or trying to take them to safety. About the stories Laskin told of people dying, he noted in the afterword using poetic license to describe what someone might have thought, said, or did prior to dying, with his choices based on interviews or accounts of people's personality. It seemed this somewhat detracted from the effort as the book contains in some parts text that it didn't seem possible to actually be known. Laskin also covers how in the aftermath of the storm, newspapers had their stories with more of a heroic bent to them, in part due to pressures to not dissuade people from moving to the region and stemming the population growth there, something which happened anyways. Drought came several years later to the area, then a financial panic and depression that caused those who had borrowed against their homesteads to go bankrupt. By the late 1890s, over 60% of the pioneer families had abandoned their homesteads. It was hard living in a region, with one of the more calamitous events to strike it chronicled well.