The Woman Who Smashed Codes by Jason Fagone

The Woman Who Smashed Codes by Jason Fagone was really a good book about Elizebeth Friedman, whose code breaking exploits on behalf of the US government began in WWI, continued during Prohibition where she helped capture smugglers, and through WWII with her instrumental in the breaking of Nazi spy rings in South America. 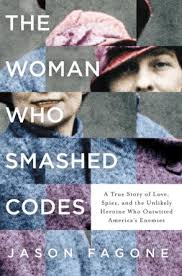 Fagone details how Friedman started in code breaking through a fairly remarkable turn of events, with her just out of college in 1916 meeting in Chicago a wealth eccentric named George Fabyan and taking a job at his Riverbank Laboratories investigating the works of William Shakespeare and whether it was really Francis Bacon who wrote them. While at Riverbank, she met William, her future husband and fellow acclaimed code breaker, and WWI began with the US brought into the war out of an intercepted message from the German Foreign Minister proposing an alliance between Germany and Mexico. William and Elizebeth began working at Riverbank for the military and for the first eight months of the war, they and their team did all the code breaking for every part of the government, with the two of them largely founding the field of cryptology, or looking to break the ciphers people used in sending coded messages.

Williams and Elizebeth married in 1917 during the war, left Riverbank in 1920, began raising two children, and continued working for the government, with Elizebeth largely focused on smugglers, and William eventually having his work revolve around decoding Japanese messages, and starting to show signs of depression and mental illness, brought on in part by the stress of his work. WWII began in 1939 with the German invasion of Poland and there was almost immediately a great concern by the US government about Nazi influence in South America and Elizebeth between 1940-1945 combated German clandestine spy efforts to get a hold on the continent. William continued breaking Japanese codes, suffered a mental breakdown in early 1941 and was never really the same after, and in December 1941, the US declared war on Japan After Pearl Harbor and Germany declared war on the US three days later.

Elizebeth was working on solving a next generation Enigma at the same time as British code breakers, cracked the machine and learned that Germany and Argentina were secretly working together, with her efforts helping force Argentina to split with Germany and greatly weaken them in South America. In addition to finding the information that would break spy rings in South America, Elizebeth also intercepted messages indicating German U-boats were targeted the RMS Queen Mary carrying 8,398 US servicemen and her intelligence was provided to the ship captain who evaded a U-boat laying in wait.

Elizebeth was part of the Coast Guard, but her work secret and J Edgar Hoover and his FBI would often take credit for her accomplishments, with another result of this that William for decades was solely noted as the force behind code breaking, and credited with the birth of the NSA, the part of the government that works in signal intelligence. Eventually Elizebeth began to receive more recognition for her work and William died in 1969 at the age of  78 and Elizebeth in 1980 at 88.

I found interesting from Fagone how the book came out of him finding a trove of Elizebeth Friedman letters in a library and previously enjoyed Fagone's book, Ingenious, and liked this even more, with both having excellent writing, and this one something that for myself was a more compelling topic with it being about a remarkable historical figure.
Posted by Dave at 10/21/2017