Tools of Titans by Tim Ferriss

Tools of Titans by Tim Ferriss was a really good book with the subtitle The Tactics, Routines, and Habits of Billionaires, Icons, and World-Class Performers. 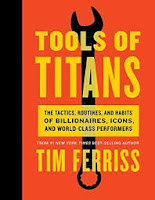 The book is split into into Healthy, Wealthy, and Wise sections and along with the wisdom and recommendations from well over a hundred people, Ferriss includes his own thoughts and highlights where ideas from one person intersect with another. This is the type of book that could be revisited many times over and the concepts and recommendations I found particularly of note, and then resources mentioned, are the following...

Within the Healthy section is the import of exercising, however briefly, first thing when you wake and mentioned a few times is the health benefit of both cold and heat exposure, like via a sauna, and the remarkable sounding exercise of AcroYoga.

Ferriss notes that more than 80% of the people featured in Tools of Titans have some form of daily mindfulness or meditation practice and noted multiple times in the book are Transcendental and Vipassana Meditation. Additionally on the subject of mental heath was the notion of if you can't make yourself happy, try to make others happy, or even just wish for specific people to be happy, and see the impact it has on you. Also mentioned was the idea of going first, being willing to make the opening friendly interaction with strangers, and if depressed, to express gratitude, and remember that you're not alone and are better than you think.

One thing I found particularly interesting from the book is the notion of writing morning pages, and the related idea of doing regular work before you worry about doing good work. Additional ideas around this are if stuck on something, to be willing to produce just one word at first if that's all that can be done, or if stuck at the beginning with something to start it in the middle. Also interesting was the story about how IBM developed their sales force by intentionally setting quotas low so people wouldn't be intimidated.

A recurring idea from the book was about spending your time doing the things you choose to do, rather than what people want you to do, in a way it's the difference between spending your time on offense or on defense. A notion from the book is we're only here a short time on earth, like monkeys on a spinning rock. Related to the idea of how to spend your time is you should either be saying Hell Yes or No to things, with the result of that you shouldn't be lamenting how busy you are as you're doing things you want to do. I also liked the concept that you shouldn't wait for inspiration and then act, just act and then inspiration has a chance of coming.

Also interesting was the concept of nerds at night, what people do outside of work and 1,000 true fans, getting a dedicated following. In terms of what one should be doing, an interesting idea from Tools of Titans was think small, be great at something thin. Related to this is the idea of picking what you're spending time on and are after, is it hunting mice or chasing antelope?

If things don't go well, it's noted that you shouldn't get upset about things, rather think about whether it happened for a reason and what can you learn from it. When something happens that's bad, it's ok to say "good" and move on, and when stuck on something, go around, try a different way. There are three options in life with any situation, change it, accept it, or leave it. Also, one should be willing to live poor, it's not that hard if you don't have people to support and your well being doesn't really require money.

About things to do at the of the day was the idea of writing at the end, noting what you're thankful for and happy about and taking notes before bed on what happened to you. Additionally, a couple of very tangible things from the book related to sleep are usage of the ChiliPad for cooling at bedtime and Sleep With Me podcast to fall asleep to.

Tao Te Ching by Lao Tzu
Siddhartha by Hermann Hesse
Dropping Ashes on the Buddha by Seung Sahn
Anything You Want: 40 Lessons for a New Kind of Entrepreneur by Derek Sivers
Stumbling on Happiness by Dan Gilbert
How Proust Can Change Your Life by Alain de Botton

The War of Art: Break Through the Blocks and Win Your Inner Creative Battles by Steven Pressfield
10% Happier: How I Tamed the Voice in My Head, Reduced Stress Without Losing My Edge, and Found Self-Help That Actually Works--A True Story by Dan Harris
Joy on Demand: The Art of Discovering the Happiness Within by Chade-Meng Tan
Zen in the Art of Archery by Eugen Herrigel
The Power of Myth by Joseph Campbell

The Artist's Way Morning Pages Journal: A Companion Volume to the Artist's Way by Julie Cameron
Sapiens: A Brief History of Humankind by Yuval Noah Harari
Influence: The Psychology of Persuasion by Robert Cialdini
Levels of the Game by John McPhee
I Seem to be a Verb by Buckminster Fuller
Deep Survival: Who Lives, Who Dies, and Why by Laurence Gonzales
Start with Why: How Great Leaders Inspire Everyone to Take Action by Simon Sinek

Books of interest noted - have read

Other resources of interest

1,000 True Fans and Cool Tools by Kevin Kelly
Inviting Mara to Tea poem by Rumi
The Shortness of Life by Seneca on the site Brain Pickings
Don Wildman profile for Esquire