"The Telling Room" by Michael Paterniti

The Telling Room by Michael Paterniti was a remarkable book that went beyond what I expected from it, but was also consistent with Paterniti’s Driving Mr. Albert in a weaving together of an interesting external story with an equally compelling story of the author himself. In relation to this idea of a writer and his work, the book was reminiscent for me of two excellent memoirs, The Tender Bar by J.R. Moehringer and Far Afield: A Sportswriting Odyssey by S.L. Price. 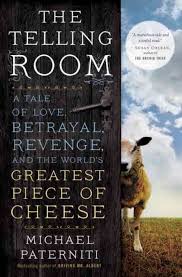 With an extended title of The Telling Room: A Tale of Love, Betrayal, Revenge, and the World's Greatest Piece of Cheese, Paterniti’s book was a great history lesson, travelogue, appreciation of slow food and epic tale. Not as explicitly spelled out in the subtitle, it also was about a way of life with family and friends, believing in someone, and storytelling… with stories told by the central character Ambrosio Molinos as well as Paterniti around his writing of The Telling Room.

The book is set largely in the small town of Guzman, in the Castile area of Spain, where the craft cheese Paramo de Guzman was once made by the aforementioned Molinos. As Paterniti reached out to and then began visiting Molinos, he was exposed to the epic storytelling both common in the region and trafficked in by the former master cheesemaker.

Over the course of time, Molinos passed along to his frequent visitor Paterniti his stories: about Paramo de Guzman, no longer making the delicacy and a life of food, drink, nature and history lived different than most all in America. Molinos and his tales seemed to hearken back to an older time and as he told Paterniti “everything is rushing forward so I must go back." In terms of Paterniti and his relationship with both Molinos and the town of Guzman, the author wrote of his experiences there as aspiring to “a life antlered by meaning and mysticism” and of later bringing his family to Guzman, Paterniti wrote “without all the distractions, we quickly became reacquainted with each other, taking long walks, lingering over meals, sharing observations or delighting in some little things our kids did. So it was that, if only briefly, we’d broken the cycle.”

In terms of Paterniti and writing of the book, he noted early in The Telling Room that “I sallied forth; temporarily occupying whatever foreign country, then came home in the back of an airport taxi with a mess of scribbled notebooks, trying to find the narrative line in all the facts and quotes.” He additionally wrote “I returned to Guzman to see what else I might find, to gather yarn, as the journalist says, when the journalist doesn't know what the hell he's doing."

As Paterniti’s time in Guzman increased, through repeated trips both before and after the months spent there with his young family, his increasing friendship with Molinos perhaps began to cause a corresponding increase in difficulty writing the book as a dispassionate observer, especially given the generous nature of Molinos and his stories, of which Paterniti wrote that his “the kind of fable in which everything, especially the hero, is bigger than life and thus takes on the quality of legend.”

About struggles writing The Telling Room, Paterniti noted “I was a journalist used to getting in and out, asking tough questions, checking off my sources with ruthless efficiency. Here, Ambrosio Molinos was my only source, and for some reason, I kept it that way. Maybe I thought if I started asking questions around about the cheese it would violate an important trust we’d established, that it might suggest that I didn't take him at his word. And that’s all an Old Castilian had in this world: his word.” Additionally, Paterniti wrote that “maybe the reason I couldn't move forward on my book was that I’d come here to move backward. This was a special case, wasn't it? Or that’s what I told myself. As a journalist, you entered other people’s lives, collecting what you could, positioning yourself off to the side, as the ultimate observer. Later, after you wrote the story – your story about their story – the reaction was never predictable. Sometimes you ended up friends; sometimes you never heard another word; every once in a while, you were threatened with a lawsuit. Perhaps this was my unconscious hedge with Ambrosio, then: If I wasn't a journalist, he wouldn't have to be my subject – that is, we’d never have to be anything but friends. If I wanted to be in his world, then I wouldn't have to stop and observe. I could just live it.”

In The Telling Room there was a fascinating and recurring thread about ideals and actuality. While the events and betrayals discussed throughout the book may well have been different than portrayed by Molinos, the ideals he espoused and friendship with Paterniti certainly felt real. Towards the end of the book, a shift occurs where Paterniti certainly doesn't betray this friendship with Molinos, but rather moves from simply being a part of his stories to a chronicler of them, albeit one who has created stories of his own as a writer who along with his family connected with Molinos and his narratives.

One quote that was included in a book footnote (of which there are many, just as in the Castilian way of storytelling) was taken from the Miguel de Cervantes book Don Quixote, “It is one thing to write as a poet and another to write as a historian: the poet can recount or sing about things not as they were, but as they should have been, and the historian must write about them not as they should have been, but as they were, without adding or subtracting anything from the truth.” Closely related to this idea of Paterniti morphing from being part of the poetry of the story to more of a historian of it was the author writing “This, I now realized, was about me, my version, wasn't it – and why I’d thrown over everything for it. No, this wasn't Ambrosio’s book after all. It was mine.”

The phrase that came to mind while reading of Paterniti’s attempt at a more dispassionate retelling of the life of his friend Molinos was one from Oliver Cromwell in the 17th century, with “warts and all” was the way to tell his story fully. Again, in no way betraying either Molinos the man or way of his life that Paterniti had grown so fond of, but rather as the author wrote “this is what I’d come to do, tell a story. And if this was the cost, perhaps I’d be forgiven, if not by Guzman, then by myself.”

Out of all this, Paterniti finished with a compelling book that covered a huge amount of ground (again, similar to Castilian storytelling) and likely would be enjoyed by anyone appreciating either writing about writing or simply an epic tale.
Posted by Dave at 8/08/2013