I've come across from a few different sources lately some excellent writing that definitely shares a common theme and seems to also offer the same take away idea.

The theme is around violence perpetuated at least to a degree by politics and examples of it have been way too common. In the US there's been the shooting of Representative Gabrielle Giffords and other innocents and in Europe recently both the attack in Norway and riots in London. Now, these atrocities are all distinct events and care should be taken to not link them too tightly, but they do all traffic at least somewhat in social standing and politics.

In terms of political discourse, the Charles Pierce Esquire feature "The Bomb That Didn't Go Off" examined the prevalence of right-wing violence and how what Pierce describes as an us vs them fragmentation of politics feeds the fire. I previously posted on the story, but it was just fascinating stuff that looks beyond the superficial causes people like to attribute atrocity to in order to make them feel better.

Not long after this piece came the aforementioned London riots and some excellent writing on them from both Time Magazine and a blog by UK-based writer Laurie Penny. 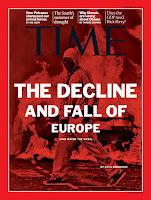 Latest issue of Time featured two really solid pieces on the London riots... one on the violence itself and one about the causes of it. "London's Long Burn" was by Nathan Thornburgh on the first subject and the more lengthy "The End Of Europe" from Rana Foroohar looked at some of the systematic causes and raises definite flags about prospects for stability in the future.

Naming convention for the story is obviously on Europe, but reading Foroohar's words towards the end brought to mind the political climate in the US as both described by Charles Pierce and evidenced by the recent budget debates and political entrenchment. Point is made in the story of the role Germany could play in the financial stability of the continent... but, both in Germany and elsewhere, the trend towards a politics of polarization would have to give way to a discourse around the greater good.

Closely related to both Time features and that by Pierce was the aforementioned Laurie Penny blog post "Panic on the streets of London." It's good writing that in a short space conveys both the violence that was happening and how it's wasn't simply "mindless acts perpetuated without cause." This of course isn't to say they were justified acts, but just as Pierce wrote... to simply call a heinous act something heinous done by crazies and nothing more is to not look at the conditions behind them and whether steps can be taken to improve and prevent.

As George Santayana told us (according to Google): "Those who cannot remember the past are condemned to repeat it."