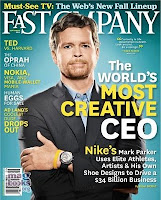 In "How TED Connects the Idea-Hungry Elite" Anya Kamenetz profiles the famous (at least in the circles that most Fast Company readers run in) TED Conference and how it's extended out beyond the namesake annual event in Long Beach.

One avenue of extending reach for the non-profit enterprise is through the TEDx program of allowing virtually anyone anywhere to stage a "TEDx Conference" based on the format, content and ideals of the main conference. Even more interesting than this idea of releasing control of the events is the release of event content via TED talks online. With some 700 talks posted on the TED website (all viewable via the iPhone, thank you very much) there's plenty of content out there and an 18 minute cap on each speaker makes each ripe for easy consumption.

Also from this issue and not in the same "opportunity to learn stuff" as TED talks, but riveting in it's own right was "Alex Bogusky Tells All: He Left the World's Hottest Agency to Find His Soul."

It's a look at the career path of the former Crispin, Porter + Bogusky advertising guru and how he's "finding himself" since abruptly quitting the industry. Just the stuff about Bogusky and what he's doing now would be interesting enough, but author Danielle Sacks spends time with a good number of Bogusky's former colleagues and from this examines the question of motive behind the career change.

Sacks doesn't try to make any definitive statements, but does bring up whether Bogusky is really just steering his career in a now hot in business direction. Part of this is also consideration of whether he's a classic narcissist getting off on the idea of a grand manipulation of people and how they view him.

Just a very interesting examination of an interesting subject.
Posted by Dave at 8/27/2010